Now that I'm caught up with the current New York State Regents exams, I'm revisiting some older ones.

Part I: Each correct answer will receive 2 credits.


11. A straightedge and compass were used to create the construction below. Arc EF was drawn from point B, and arcs with equal radii were drawn from E and F. 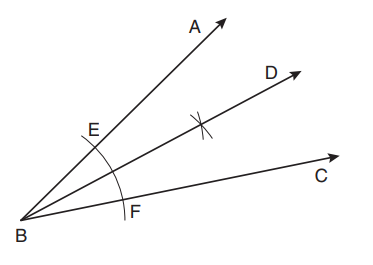 WhWhich statement must be true?


Because the diagram doesn't have to be drawn to any kind of scale, you cannot go by how it looks, particularly when it comes to angles C and D.

The things that we do know are that the three interior angles sum up to 180 degrees and that the two supplementary angles (which have B as a vertex) sum up to 180.

We also know that the Remote Angle Theorem tells us that the measure of angle ABC must be equal to the sum of the two remote angles C and D. Since angle ABC equals the sum, it is greater than either one of those two angles alone. This is stated in Choice (3).


Parallel lines have the same slope, so you need to know the slope of the given line. Notice that there are two different slopes among the choices, which will make elimination easier.

Substitue x = 2 into the remaining equations, and see which one gives you y = 2.


When you refelct over the line y = x, the coordinates will switch places, regardless of which quadrant the original point is in. No sign flipping needs to be done.

14. As shown in the diagram below, AC bisects ∠BAD and ∠B ≅ ∠D. 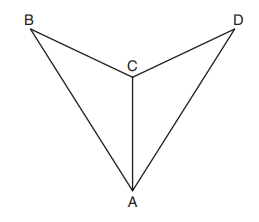 Which method could be used to prove △ABC ≅ △ADC?


First of all, AAA is not congruency theorem. It only tells us similarity.

You are given two angles and the reflexive property tells us that side AC ≅ AC. AC is NOT between the two pairs of angles, so it is AAS not ASA.


M is the midpoint of AB. Calculate the change in x and change in y from A to M and then add those numbers to M to get B.