Now that I'm caught up with the current New York State Regents exams, I'm revisiting some older ones.

EDIT: I don't know what exam I started below, but it doesn't appear to be August 2011. It will be corrected soon.

Part I: Each correct answer will receive 2 credits. 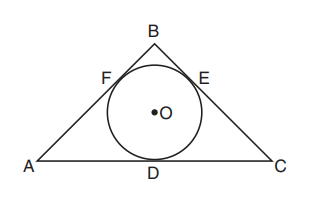 What is the perimeter of △ABC?


When two tangents of a circle intersect, the segments between the point of intersection and the circle will be congruent. So AD ≅ AF; BE ≅ BF; CD ≅ CE.

2. Quadrilateral MNOP is a trapezoid with MN || OP. If M′N′O′P′ is the image of MNOP after a reflection over the x-axis, which two sides of quadrilateral M′N′O′P′ are parallel?


A reflection doesn't change the shape of the object. Lines that were parallel will still be parallel in the image. 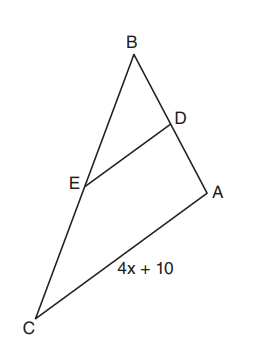 
The midsegment is half of the length of the side of the triangle that it is parallel to.

4. Which statement is true about every parallelogram?


Answer: 3) Two pairs of opposite sides are congruent


The opposite sides of a parallelogram are always congruent.

5. The diagram below shows a rectangular prism.
Which pair of edges are segments of lines that are coplanar ?

AB goes front to back, but DH goes up and down. Eliminate Choice (1).

AE goes up and down, but DC goes front to back. Eliminate Choice (2).

CG goes up and down, EF goes front to back. Eliminate Choice (4).

at long before the end.